Neo Prog Review: Airbag- A Day At The Beach 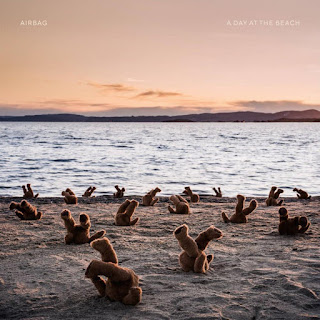 The Norwegian band, Airbag, was formed by high school friends away back in 1994 but the release of their first EP heralds the fresh start as a “proper” band. They released a second EP which was freely downloadable from their website, as indeed, was the first release.

In 2009, the band was signed to the Norwegian label, Karisma, and the first album, Identity, was issued. This included more fleshed out versions of tracks on the two EPs, which were subsequently deleted. Three more albums followed, All Rights Removed (2011), The Greatest Show On Earth (2013), and Disconnected (2016) before the new album under review, A Day At The Beach (2020).

Initially a 5 piece band on the debut, there was a change in the drum seat for album 2, the same line-up for album 3, before a drop to a 4 piece outfit for album 4 and a further drop to a trio, comprising Asle Tostrup (lead vocals/keyboards/programming), Bjorn Riis (guitars/keyboards /backing vocals) and Henrik Fossum (drums) on this new release. Asle and Bjorn are original members with Henrik joining as the drummer from album 2, so a very settled core to the band. Guesting on A Day At The Beach, is bassist Kristian Karl Hultgren from fellow Norwegian band, Wobbler.

The opening track, “Machines and Men” (10:48) is unmistakably Airbag, that is, if you are conversant with earlier releases by the band. As with a few Airbag introductions, there is a quiet section before any sound becomes detectable, and that first sound appears to be provided by the guest musician, Kristian Karl Hultgren’s bass. This repetitive riff is soon joined by the guitar of Bjorn Riis and the characteristic vocal of Asle Tostrup, before a more 80’s style electronica passage settles in with the band in full flow; bass, guitar, and drums perfectly in synch behind the vocals. Around 5:30 minutes, the sound falls away leaving a bass and guitar passage before the vocals return and the driving sound restarts with Bjorn’s guitar coming through loud and clear at around 7:15 minutes. The vocals arrive again nearer 8:00 minutes and an excellent instrumental section leading to the sound simply fading towards the track finale will have kept the listener’s attention. This track flows through light, airy passages and heavier, darker areas and is a superb opening track to the album.

“Sunsets” (8:16) is track 4 and starts with a little drum rhythm before the band kick into play. A slow passage that builds, then drops to leave bass and drums, and that expressive voice from Asle. A verse later and the chorus kicks in at a higher level before returning to the atmospheric music that Airbag is renowned for. Just after the 3:00 minute mark, the towering guitar provided by Bjorn takes over and drives the track along. Over the 4:00 minute mark and there is another “doff of the hat” to some 80’s electronica, before Bjorn “ups the ante” even further. Asle’s characteristic vocal takes over again before leaving the way open for the guitar of Bjorn to sweep the track on from around 6 minutes, until 7:45 minutes when it is atmospheric to the finale.

This album, A Day At The Beach, is a stunning release from the band. They have perfected, in my opinion, a “less is more” attitude with the quiet passages being as powerful for the listener, as an all-out blast from the guitar. They paint superb aural landscapes on each album and A Day At The Beach is no exception. I will happily admit to being a huge fan of Airbag, but the band has always produced “the goods” with each successive album. My advice is simple, go out and buy this album and you will not be disappointed, and it might tempt you into purchasing their back catalog.