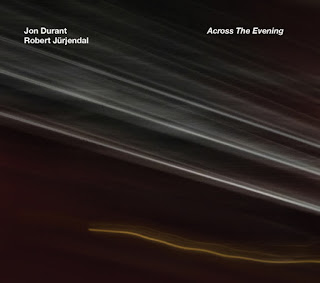 “Across the Evening,” by ambient experimental guitarists Jon Durant and Robert Jürjendal, further extends the ambient/jazz/world crossover music both musicians have traversed throughout their diverse careers. Featuring appearances from Colin Edwin (UK) on bass, Aleksei Saks (Estonia) on trumpet, and Andi Pupato (Switzerland) on percussion, “Across the Evening” is a multi-dimensional, trans continental delight.

With sounds that caress and envelop, rhythms that percolate and inspire, the two guitarists nimbly play off each other and their guests, rarely allowing the listener to imagine that they are hearing guitars.

From the sublime “Reflective Sea” to the deep middle eastern vibe of “Beguiling Eyes,” the album crosses multiple stylistic boundaries. The final two tracks, “Return to Russia” and “Balkan Blue” are live recordings from the ensemble's live performance in Tallin, Estonia in 2019.

Says Jon, “Robert and I had known each others' work for some time - I'm really fond of his group Uma (with Aleksei Saks), and between my collaborations with Tony Levin and Colin Edwin, he'd been following my work as well. But we hadn't connected personally until recently. When the idea of collaborating was floated, we met it with great enthusiasm. We are both very interested in the textural possibilities with guitar but approach it differently, both in terms of tools and techniques. In the end, the two approaches blend wonderfully, and it's often hard to believe that what you’re hearing is guitar. When we began working, we realized that while it's great to be able to work remotely, there was a strong desire to also work together in the same room. I arranged a trip to Tallinn, and Robert organized a concert at Philly Joe's Jazz Club in Tallinn. We were very fortunate to have Aleksei Saks join us on Trumpet, and Inna Kovtun came up from Kiev to sing with us. It was an incredibly inspiring evening, and two tracks on the album are from the recording of that show. The album includes ideas and concepts born out of our few days of rehearsing and improvising together, and flushed out with fantastic performances from Colin Edwin (bass) and Andi Pupato (percussion).”

Jon Durant brings a unique sense of texture and melody to his instrument. His unique “cloud guitar” soundscapes and engaging lead work have graced numerous CD recordings and film soundtracks and his very distinctive use of fretless guitar has been widely admired. He has previously released 9 solo albums and three Burnt Belief records (with Colin Edwin). Durant's acclaimed 2018 solo release “Parting Is” was his first “solo guitar” recording and the follow up solo guitar album “Alternate Landscapes” continue to stretch the boundaries of what a guitar record can sound like. Both solo CDs have been nominated for “Best Ambient Album” in various US new age radio publications, while “Alternate Landscapes” also spent multiple weeks at the top of the NACC Chill Charts.

Robert Jürjendal is an Estonian guitarist and composer who studied classical guitar and composition (Anti Marguste) at Tallinn Georg Ots Music School. In 1992-1997 he participated in Robert Fripp Guitar Craft Courses. He has written music for classical and contemporary guitar, cembalo, mixed ensembles, choirs; documentaries, art exhibitions and theater. His compositions include both traditional and contemporary elements, from folk music to post-rock and ambient-jazz. Robert Jürjendal is working as a freelancer composer / artist / lecturer. He is also the curator of the music program SOOLO at Tallinn Art Hall. Recent albums include “Source Of Joy” (Unsung Records 2013), “Balm Of Light” (iapetus - media 2014) and “Simple Past” (Strangiato Records 2016). “Another World” (with Colin Edwin) (Hard World 2018), “Five Seasons” (Albany Records 2018), With Noya and Godwin, “Samliku” (New Dog Records 2019), with Sandor Szabo “Electric Poetry” (Greydisc 2019).