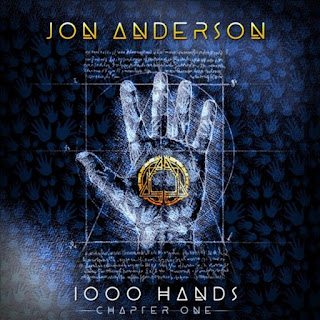 The name, Jon Anderson, is inextricably linked with the band Yes, as the unique vocalist has appeared on at least 15 of the albums released by the band, but as a solo artist, Jon has released 16 albums. The debut, Olias Of Sunhillow was released in 1976 and the newest release, 1000 Hands Chapter One, is scheduled for release in July 2020.

Jon has a very characteristic voice which he describes as an alto tenor, although some reviewers wrongly class his voice as falsetto. The album being reviewed, 1000 Hands Chapter One, has its origins back in 1990, when much of the material was produced. It was then put on the back burner due to the commitments of Yes. Fast forward to 2016 and the idea of using this previously taped material to produce a finished album resurfaced. The list of musicians involved reads like a “Who’s Who” of major name musicians, including Steve Howe, Larry Coryell, Chick Corea, Rick Wakeman, Ian Anderson, Jean Luc Ponty, Billy Cobham, and Carmine Appice.

The opening track, “Now” (1:13) is a short acoustic track that highlights the stunning Jon Anderson voice. Acoustic guitar and a vocal, so simple, but so atmospheric, and a wonderful opener to the album, which leads straight into track 2, “Ramalama” (3.49). The tempo has notched up a little, and the opening minute is acapella, with Jon’s voice being multitracked, before the instruments joining in. The track fills out with banjo (?), drums and violin, and has a sing-along feel to it, almost tempting the listener to join in, before gently fading out.

Track 3, “First Born Leaders” (5:22) takes off in another direction, starting with a gospel “call and answer” style vocal, again in acapella style. A steel band enters and changes the feel of the track, with the vocals settling into a gentle meander. Instruments appear and disappear over the main part of the piece, such as guitar and trumpet, as that superb vocal carries everything along. It is that amazing voice that holds the track together, together with the brass sound at times. At the last minute, the song reverts to the opening passage before Jon escorts the track to the sudden ending.

The finale to the album is track 11, “Now and Again” (3:39) and is a revisiting of the opening track but fleshed out a bit more, and forms the perfect ending to the album, having come full circle through a variety of different styles.

1000 Hands Chapter One touches many styles as it moves through the 11 tracks, acapella, steel band, gospel, strings, world music, and I even detected a little nod in the direction of Olias of Sunhillow, Jon’s debut album. On first hearing, I will admit that my thoughts were that this was a very different Jon Anderson album to previous releases, but repeated hearings suggest that this is an album that Jon has set out to produce and has done so excellently. His use of the different styles and the recurring themes reminded me of a similar album released by David Gilmour, Rattle That Lock, back in 2015, which was a very different style of the album from David.

1000 Hands Chapter One is certainly worth a few listens and it will then be up to the individual listeners to make up their minds. In my opinion, it is an excellent album, which seems to have different hooks each time it is played.