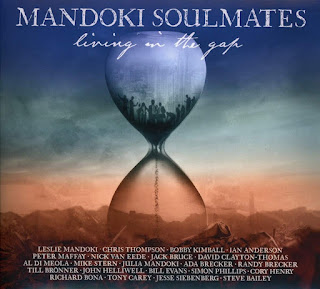 Mandoki Soulmates debuted in 1991. The band consists of many members but, the founding three are Ian Anderson, Jack Bruce, and Al Di Meola; along with Leslie Mandoki. Often coined as a ‘supergroup,’ Soulmates present themselves as a unified front. They direct the band as one whole unit, rather than several different bodies and voices just up on a stage. While most artists and bands either remain on one side or the other of the political aisle or keep their personal politics out of their artistry, Mandoki Soulmates lightly sprinkles political undertones throughout their music, especially on the newest released album Living in the Gap + Hungarian Pictures.

Now let’s get down to the business of the music. “Living in the Gap” starts the album with a big-band/jazz, funk-fusion that is quite fitting for such a time as this. The group sings of unity and bridging the ‘gap’ to where we separate from others intentionally on almost every subject nowadays. It also hints of a thought that there is no “right and wrong” rather, it’s a matter of collective agreement or disagreement.

“Young Rebels” is a shout to how all different young individuals, each with varying backgrounds and experiences are trying to get through each day of this world and possible change in a peaceful but ever-so-nonchalant manner. In the same way, they cannot decide whether they are trying to bring about some old ideals as a youth, or much older but with youth mindsets and hopes. “Turn the Wind” takes a bluegrass-like spin in the record. It comes down to simply a relaxed tune, but, it does beg the question within, “can we stop anything, anymore, at all?” Or, is it a lost cause in trying to make a big change? “Where We Belong” sings of this back and forth between feel-good moments and some that dig in a little deeper in pain or sorrow.

What I might call the ‘anthem song,’ “Let the Music Show You the Way” is a bright and uplifting tune to bring anyone out of their funk. Completely void of any particular signaling or message, it simply enlightens the listener that music is the universal peacekeeper as it allows us to align our feelings to any song we choose. “Too Much Pride” belts out a trumpeted jazz message of an overwhelming sense of pride, unable to move out of our own way to see more clearly, other individuals and how they see and feel through life.

“Old Rebels” is a continuation of “Young Rebels” but, carries the same message from before with a wiser, somewhat opposing perspective. “Welcome to Real Life” eerily fits well with today’s political and human climate. Between the unrest of all of us being quarantined and innocent individuals dying all across the country, the lyrics ring too true, wherever your viewpoints may fall. “Hottest Queen of Cool” invokes a sexy, sleek, jazzy number to a woman who absolutely dominates what seems to be the entertainment lifestyle, almost emulating a Hollywood starlet, turning everything before her, about her.

“Wake Up” is a call-out type of song to all who will listen to change the things we see going on in the world before it might be too late, according to the band at least. Singing of “dark hearts and free minds,” one can imagine, the song is to be about making the world as bright and light as can be. “Mother Europe” follows with a song seemingly of a love of the European continent as though they are defending the nation. “I’m Not Your Enemy” begins with a 2-minute and fifty-second instrumental, cool and mellow guitar-turned-keyboard-turned trumpet solo. Afterward, the singer comes in calm and peacefully proclaiming how she and another do not have the same mindset of anger and resentment. Instead, she speaks of how she will always remain by the other’s side. Another minute and a half instrumental solo takes place before the chorus chimes back in.

A stroke of a piano keyboard twinkles the next song, “Sessions in the Village.” While the singer sings of what sounds to be a very poetically structured verse, the song then cuts from her to a synthesizer party, including a trumpet at times;  making waves in this piece to make it seem like it is a village celebration. “Utopia for Realists” brings back a male vocalist to explain how the band sees modern awareness of the world’s happenings as a glimpse of the utopia beyond. “Transylvanian Dances” is a piece of periodic verses and an overall somber tone. At the 12:22 mark, it begins to speed up for about a minute and eight minutes, turning into an all-out rock fest. Then, ending it out, it slows back down to a man singing of his son being pointed towards open roads.

“You’ll Find Me in the Mirror” is the singer looking back and reflecting on what might have been of him and now he longs for that same trust and security back that he once had. Then comes in “Return to Budapest,” and it’s exactly what you’d expect from that title. It’s a soothing, alluring song of tradition and simplicity. “Barbaro” does give off the initial impression of barbarianism with its rush of drums. When the trumpet kicks in, it turns into more of a jam session of beautifully blending instrumental families. With the piano, it kind of throws a bit of a side curveball but keeps the dramatization of the piece going, sounding like the song is growing faster and faster; thus, more exciting. Ending out the entire album, “The Torch” sings of empowerment and strength to those who come after the singers, in relaxed, chant-like fashion.

Key Tracks include: “Living in the Gap,” “Too Much Pride,” Barbaro,” and “I’m Not Your Enemy”