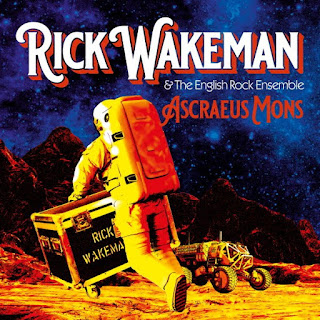 Ascraeus Mons /əˈskriːəs ˈmɒnz/ is a large shield volcano located in the Tharsis region of the planet Mars.

With the release of Rick Wakeman’s new studio album, The Red Planet due on August 28th 2020, described by BBC Radio 2’s Steve Wright as “King of the Prog rock keyboard .. one of our most successful and prolific musicians”, has released the first single to be taken from the album entitled “Ascraeus Mons”.

Inspired by 2021 being the anniversary of mans’ first expeditions to mars plus the fifty since including many landings Wakeman states “the incredible information discovered and of course some astonishing images. You just have to look at the photos online or in books to be inspired, the landscapes are fascinating and the volcanoes are huge …..bigger than anything on earth. It was the perfect subject for me to be inspired musically.”

He explains further “The main themes and ideas were all written on the piano, with photographs of Ascraeus Mons scattered around. I wanted the start of the album to be a statement and I always felt the church organ as an initial solo instrument said it all. This is certainly a track that screams out to be played live.....so I’d better get practising !!”

The Red Planet features 8 newly composed pieces, especially for this project, and harks back to Wakeman's critically acclaimed debut album The Six Wives of Henry VIII where there were 6 heavy keyboard pieces based around a central subject matter. It is a serious return to “Wakeman Prog”...

“Rick Wakeman himself is a true visionary, a maestro, and a storyteller that has brought The Red Planet to life.” Echoes And Dust

Rick has blown the dust off his favourite analogue keyboards and along with his with the latest keyboards, has used the same formula he devised when making his legendary albums The Six Wives of Henry VIII and Criminal Record.

Upon being asked about the expectations of his Prog Fans, that they are hoping he will have shoved the “Prog Fader” up to 11, he replied, “That could be a problem.... as it's already at 14!!!”

The album, produced by Rick Wakeman and Erik Jordan, has already garnered high praise and coverage in the worldwide media including Vanity Fair, Billboard, plus making the cover feature in the UK’s Prog Magazine and multiple interviews on BBC radio stations. 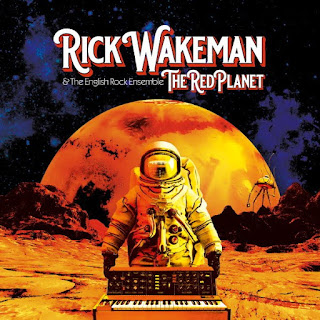 Madfish will be releasing worldwide to retail The Red Planet as a CD Digipack with 20 page booklet, a black vinyl 2LP in gatefold sleeve and digitally on 28th August 2020, these are available to pre-order HERE (https://rickwakemanmadfish.lnk.to/TheRedPlanet)

For a limited number of very lucky fans there is (covid-19 dependent) a special launch event to be held at the UK’s National Space Centre in Leicester on Saturday 22nd August – more details on tickets can be found HERE (https://www.musicglue.com/rick-wakeman-the-red-planet/products/star-vice-admiral-star-playback-event-at-the-national-space-centre-with-bag-of-goodies-signed-event-programme-and-signed-cd-slash-dvd)