Neo Prog Review: Abel Ganz-The Life Of The Honey Bee and Other Moments Of Clarity 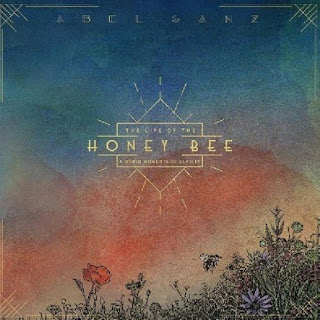 Abel Ganz was formed back in 1980, had a ten-year hiatus from 1996 to 2006, and came back bristling with new ideas. The debut appeared in 1984, Gratuitous Flash, which was remixed, remastered, and re-released in 2016. The album under review is album No 7, The Life Of The Honey Bee and Other Moments of Clarity.

The band has undergone many personnel changes since coming into being in 1980, but original members are still around in various bands. If you want to find out more about Abel Ganz, then check out my pod-cast, “The History Of Abel Ganz”, available as The Ancient One Show No 140 on www.progzilla.com

The Life Of The Honey Bee and Other Moments of Clarity is a 6 track release, although there is an extra track on the 2 different digital releases, and has a running time of just over 50 minutes (50:18). The third track, “Arran Shores” is the shortest track on offer at 2:40 minutes, and the fifth track, “Sepia and White” is the longest at 13:31 minutes.

The opening track, “The Life of the Honey Bee and other Moments of Clarity,” the title track starts off with a gentle acoustic guitar riff that morphs quickly into a full band workout on the same theme before the acoustic guitar/keyboard comes back and Mick’s vocals join in just after the 2-minute mark. Mick’s voice is a very characteristic part of the Abel Ganz sound and the powerful voice carries the expression of the lyrics excellently. The listener is drawn into the world of Abel Ganz almost like settling into a favorite armchair and joining the band on the musical journey. Just on the 4-minute mark, we are treated to an unexpected harmonica passage by Alex Paclin, which sounds more like Stevie Wonder than Stevie Wonder does. Another superb instrumental passage takes us back into those wonderful lyrics presented so well by Mick. After 6:15 minutes, there is a second unexpected appearance, this time by Fiona Cuthill, playing superb fiddle, which heads up an excellent passage prior to the keyboards of Jack Webb building up in the background. Just shy of the 9-minute mark there is another directional change, this time the bluesy guitar of Davie Mitchell (I think) before the track seems to settle into an area very reminiscent of Steely Dan, as the opening track moves towards its completion. Before it does so, however, the excellently named Snake Davis adds a superb saxophone ending. The opener has lasted 12:37 minutes and Abel Ganz has nailed it, taking the listener here, there, and back again on the journey and ensuring that they are looking forward to what else this majestic album has for them.

The next 3 tracks, “One Small Soul” (5:52), “Arran Shores” (2:40), and “Summerlong” (5:22) move more into the gentle acoustic environment, ”One Small Soul,” finds Mick again in fine voice, duetting at points with Emily Smith ( a former Scots Singer Of The Year) and producing a superb modern folk-inspired track which has an instantly memorable melody. “Arran Shores” allows David King to show how a simple acoustic guitar number can evoke so many thoughts and memories, especially if you know the Isle of Arran. The third track, “Summerlong” takes the listener on another journey with some beautiful piano and strings, showing different facets of the Abel Ganz sound. In these three tracks, there are wonderful mo-ments with guitars, keyboards, vocals, and the powerhouse of bass (Stephen Donnelly) and drums (Denis Smith) underpinning everything that is going on.

The second of the long tracks, track 5, “Sepia and White” (13.31) starts up like a full-blooded rock workout before dropping into a superb piano passage heralding Mick’s vocals entering the track around the 2:15 minute mark. More guitar riffs appear and carry the track along and into a repeat of the earlier piano/vocal combination, prior to a majestic synth passage which leads into a full band workout led by the guitar. This section is a good example of the band flexing their collective musical muscle. Midway through the track, it is another superb piano passage that links to an almost laid-back section, with a simple melody that hits the listener just right. This track seems to ooze a feeling of nostalgia which is prevalent throughout the album, looking back but gazing forward with hope. The band drives the track to its finale.

The final track, “The Light Shines Out” (6:17), is a very gentle laid-back piece of music with Denis taking over the reins of lead singer, backed by a superb low whistle melody. The vocals are very different from Mick, but seem to suit this particular track very well. As the track progresses, the listener becomes aware of a subtle piano passage behind the vocals and the appearance of some subdued strings. Around the halfway point, there is some excellent bass from Stephen prior to a short melodic passage before the vocals return. Just after the 5-minute mark, the low whistle returns with the earlier motif and the track evolves into a short “funky” fadeout.

Earlier this year in a review, I commented that I had not heard a “perfect album,” but the band in question at that point, Kaprekar’s Constant, had come very close to that mark. Honey Bee exceeds that previous review by a few tenths towards perfection and is certainly my record of 2020.

This is a majestic album produced by musicians who have a vision of where the band is going and possess the skills to take the band there. Credit should also be heaped onto the Abel Ganz guest musicians, some of whom have appeared regularly on previous albums.

My advice is very simple, go out and get hold of this album, although the success since the release has resulted in the CDs selling out and a reprint is now in progress. Don’t lose out again and get one ordered as soon as possible.

Normally I would sum up, but I will let the band do that, as they have done it rather well. “The influences on the new album continue in a similar vein (to previously), further developing the band’s eclectic mix of folk, rock, metal, and Celtic styles. The album’s trajectory shifts between crunching guitars, subtle acoustic instruments, strings, soaring Hammond, and emotive grand piano, all connected by lyrical storytelling plus timeless vocals and harmonies.

Email ThisBlogThis!Share to TwitterShare to FacebookShare to Pinterest
Labels: Abel Ganz, Neo Prog Review, Prog Rock Music Talk, The Life Of The Honey Bee and Other Moments Of Clarity