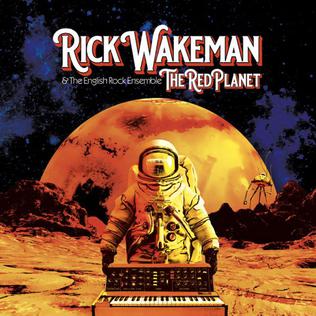 Red Planet is the newest release from The Caped Crusader, otherwise known as Rick Wakeman. Rick is probably one of the best known prog musicians and a pioneer in the use of electronic keyboards in rock music. As well as previously having been a member of The Strawbs, Yes and Anderson, Bruford, Wakeman and Howe (a Yes offshoot), not forgetting AWR (Anderson, Wakeman, and Rabin appearing as Yes), he has a list of session credits that almost stretch to the Red Planet. This list includes David Bowie, Elton John, Black Sabbath, Cat Stevens, Al Stewart, Lou Reed, and many more. Rick has also found time to release more than 100 solo albums across a swathe of genres.

The Red Planet is a return to the beginning, in that Rick has returned to the symphonic prog that appeared in many of his early albums, such as 6 Wives of Henry XIII, Journey To The Centre Of The Earth, The Myths And Legends Of King Arthur And The Knights Of The Round Table and No Earthly Connection.

The band on The Red Planet is Rick Wakeman (keyboards), Dave Colquhoun (guitars), Lee Pomeroy (bass), and Ash Soan (drums) and the other musicians are given the collective name of The English Rock Ensemble.

The Red Planet is an eight-track album with a total running time of just over 56 minutes (56:24), with track 4, “Olympus Mons” being the shortest at 5:20 minutes and the final track, “Valles Marineris” being the longest at just over 10 minutes (10:02).

The opening track, “Ascraeus Mons” (5:52) immediately puts the listener into a high plane of expectation with the superb swathe of swirling keyboards that ride over the top of that tight power unit of drums (Ash) and bass (Lee). Initially starting with a church-like organ passage, the drums and bass soon boost the sound before the excellent keyboard passages follow one another, revisiting earlier themes, but exuding first-class symphonic prog. A choral sound provides several passages before the guitar (Dave) gets a chance to shine. As an opening track, this is a very satisfying return to Rick’s symphonic prog areas and leaves the listener eager to sample the remaining seven tracks.

Track 5, “The North Plain” (6:53) has a spacey, quiet start with a piano theme, which gently builds in intensity until the drums, bass, guitar, and keyboards launch into the mix around the 1:30 minute point. A wonderful passage on keyboards follows while the powerhouse of drum and bass underpin everything so well. At 2:50 minutes, Rick’s keyboards start to soar above all else before a return to a similar passage to the start, which is very atmospheric and takes the track on past 4:40 minutes. Cue again another keyboard passage from the Caped Crusader himself, before a return to one of the earlier keyboard themes and a relaunching of another theme, but this time on guitar rather than keyboards which takes the track out.

“Pavonis Mons (7:13), track 6 starts with the band in unison before a nice passage from the keyboards, them a sudden change in tempo before returning to the opening theme. Superb keyboards over the solid rhythm section lead to a change of tack at the 2:00 minute mark, with a different keyboard theme before morphing into a piano passage and back into the keyboards. The track swings back into the earlier themes and changes tempo a couple of times as it starts to wind towards the finale. There is, however, still time for another flurry of keyboard work from Rick as we enter the last minute.

The Red Planet is an excellent example of keyboard-based symphonic progressive music played by one of the best, if not the best, keyboard players in the music environment. If you enjoy the earlier works by Rick, mentioned earlier in the review, this album is definitely for you and if you are new to Rick Wakeman, get this album as a superb example of a very skillful keyboard player at his very best.