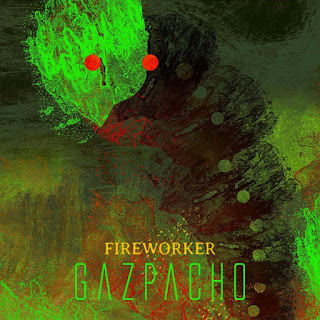 Gazpacho hail from Norway and was formed back in 1996. The release under review is the 11th studio album from the band, Fireworker, and the debut was released in 2003, Bravo. I have liked this band for several years after hearing a track on a sampler CD and have enjoyed their music immensely.

Briefly, they are one of the few bands that seem to be able to generate majestic atmospheric soundscapes, where the quiet (and even silent) moments are as important to the overall effect of the music as the superb skills of the musicians.

The band has been relatively settled, with Jan Henrik Ohme (vocals), Thomas Alexander Anderson (keyboards), and Jon Arne Vilbo (guitars) all original members of the band, who were then joined by Mikael Kromer (violin/mandolin) and Kristian Torp (bass) as guest musicians on the album No 3, Firebird, in 2005 and band members on the next release, album No 4, Night, in 2007. Finally, Lars Erik Asp (drums) appears in the band on the album No 6, Missa Atropos, in 2010 and that band has remained constant in the intervening years.

Gazpacho has a tradition of producing albums that fuse various situations, from deep philosophical questions to the intricacies and complexities of the human mind. Isolation was the key on earlier albums, Night and Missa Atropos, dramatic scenarios on Tick Tock and Soyuz, and theological /scientific questions on Demon and Molok.

Fireworker deals with an entity that inhabits everyone and ensures that it survives from generation to generation and can, at times, control our actions. The entity is known by several names, Fireworker, Lizard, or Space Cowboy. The entity exerts control by rewarding or punishing the individual. So, you will have gathered this is not a light-hearted musical album, but it is a wonderfully atmospheric piece of work.

The opening track, “Space Cowboy” (19:41) is a stunning piece of music by the band. Starting very simply with the superb voice of Jan Henrik Ohme, backed with subdued bass, piano, and violin, setting the scene before the band moves up a notch around the 2-minute mark. The track moves on with changing tempo from time to time. Around the 5-minute mark, a choir appears which is a warning to the individual not to get closer to the entity within. The lyrics are in a pre-language, so no easy to follow lyrics. The track then swings from Jan Henrik led atmospheric vocals and music, back and forth to the choir. Around the 13-minute point, the band moves into a more hard-hitting passage.

I will admit that this opening track did take me several listens, as well as checking the band’s explanation of the track on Facebook, before the sheer magnitude and power of the opening 19+ minutes hit home. Not the easiest track to open the album with, but when you “get it,” it is superb. A track that makes you work hard to understand it.

The next three tracks, “Hourglass” (4:15), “Fireworker” (4:41), and “Antique” (6:24) are shorter and easier to get into while continuing the atmosphere generated by the opening track.

“Hourglass” is more up-tempo with superb piano in the opening portion and a church-style organ passage before the choir re-entering. The stunning, haunting violin played by Mikael, the superb piano passages, and those crystal-clear Jan Henrik vocals make “Hourglass” and excellent 4+ minutes.

The title track, “Fireworker,” is a quite different style of a track which simply rips along, from the violin enhanced early passages, through the vocals and allows the band to flex those musical muscles. Tempo changes drive the track towards its finale which sees the song simply fade away.
“Antique” continues the gentle atmospheric soundscape with the band in superb form, little bass lines, exquisite drumming, superb piano, and guitar, all contributing behind that powerful vocal. The violin has another great passage just after 3 minutes and then moves behind the vocals, bass, drums, and keyboards as the song finishes.

The final track, “Sapien” (15:22) has a keyboard and drum intro before the rest of the band pitch in and the vocals enter just after a minute. The melodic vocal weaves its way along before becoming more forceful around the 2:30 minute point. The haunting melody drifts along, almost as a touchstone as the track progresses. Around the 5:15 minute, the band leaves a keyboard and Jan Henrik’s voice to continue the story, then return under a minute later. A gentle piano and synth passage follows and the vocals re-enter. This passage is an excellent example of how to produce an atmospheric soundscape. The musicians make it seem so simple, but they are experts at this style. The tempo rises slightly before leaving just the drums, bass, and piano to continue to build the atmosphere. At 11:00 minutes, those beautiful vocals reappear and start to carry the track towards the finale. Returning to a previous theme, the band set about completing this superb soundscape. Sparse instrumentation behind the vocals slowly builds and the track starts to fade just before the 15-minute mark.

Fireworker is simply a majestic album that requires several listens and a fair bit of work on the side of the listener, but I would suggest that the listener spends the time and makes the effort. The reward will be the full appreciation of a superb piece of work by a group of dedicated, and very skilled, musicians.