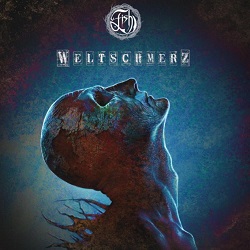 The new, and final studio album from Fish (David Dick), is the superb Weltschmerz, which is album No 11 from the ex-lead singer of Marillion (1981-1988). The debut release of Vigil In A Wilderness of Mirrors was issued 30 years ago (1990) and we have now reached the end of the line.

The album is available as a 2CD, 2CD and Blu-Ray deluxe edition, a digital version and a 2-album vinyl version.

I have at this point to state that I preferred the Fish led Marillion rather than the post-Fish band, but I was never “blown away” by his solo material. There were some great tracks, but I tended to feel that the consistency of the music could be variable. That state of affairs however changed with the release of Feast Of Consequences, album No 10, which was a superb piece of work, especially the 5 part "High Woods Suite." I have looked forward to this final studio release from Fish for several months before the release.

The title, Weltschmerz, translates as world pain or world-weariness and may well sum up the feelings of the artist at the time, but the contents of this superb double album certainly are a long way from that downbeat title.

The Fish voice has been described as both distinct and also as a fusing of Roger Daltrey (The Who) and Peter Gabriel (Genesis), but it is his lyrics, classed as “poetic prose” that add an additional facet to the mans’ music. Fish can and does, interject spoken word lyrics into his music which seem to accentuate the storytelling aspect of his work.

The opening track, “Grace of God” (8:19), is exactly what I want to hear when listening to a new album, and that is something that immediately grabs the interest of the listener. There is a sparseness about the music behind the voice of Fish as he ventures into his storytelling, which is somehow very compelling. The lyrics paint such detailed scenarios that the listener becomes immersed in that storytelling.

The longest track, “Rose Of Damascus" (15:45) brings together the aspects that make the area in question such a volatile area to exist in, as seen through a young woman (Rose) who is trying to flee the war-torn area. In under 16 minutes, the listener is taken on a long journey through different sections with those superb lyrics tying everything together and trying to make sense of the problems that exist. The music twists and turns and holds the listener almost spellbound as the storyline unfolds.

Starting the second album is track 6, "Garden of Remembrance" (6:07) and is, for me, the most powerful, emotive track on Weltschmerz. Based on the changes in a relationship due to Alzheimer's, the lyrics are simple but literally oozing emotion as Fish relates the interaction, or rather, the lack of interaction between husband and wife. Musically there is a beautiful melody on piano behind his voice which underpins those lyrics, and latterly, a superb orchestral theme.

As a final studio album, Weltschmerz is an excellent way to bow out of further studio recording. Early in the review, I suggested that with the title translating as world-weariness, that could sum up how Fish must have felt with the personal situations that he had to confront during the recording process. Over the 5 years that Weltschmerz took to get to completion, he has touched on these moments throughout the ten superb, if very different, tracks and has produced a stunning swan song.

If you haven’t already purchased the album, I would humbly suggest that you give Weltschmerz a listen from start to finish and then part with some of your money to add the album to your collection.