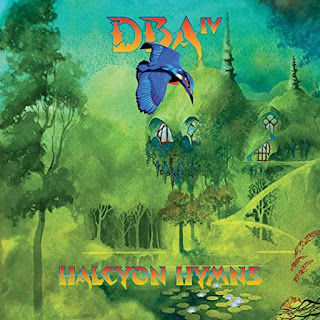 The Downes Braide Association is a studio-based project by Geoff Downes (keyboards) and Chris Braide (singer/songwriter), both of whom have a rich musical heritage.

Geoff has been a member of The Buggles, Yes and Asia, while Chris has written and produced music for film scores, advertising campaigns and worked with Lana Del Ray, Beyonce, Paloma Faith, David Guetta and co-wrote the music for Seven Worlds One Planet (A David Attenborough BBC TV series) together with Hans Zimmer and Sia.

The debut album from the Downes Braide Association was issued in 2012 and titled Pictures of You, followed 3 years later by Suburban Ghosts and then in 2017 by album No 3, Skyscraper Souls. A live album from the band was also issued in 2019, DBA Live In England.

Under review is the fourth, and latest, album from Downes Braid Association, entitled Halcyon Hymns. This is a 12 track album with a total playing time of around 64 minutes (63:37), with tracks 11 (Remembrance), and 10 (Late Summer) being the longest at 11:44 minutes and the shortest at 2:24 minutes respectively.

The opening track, “Love Among The Ruins” (6:24) starts with a short spoken section before a gentle acoustic before the vocals of Chris Braide appear. The guitar of guest musician, Dave Bainbridge (Iona/Strawbs) soon soars over the track and adds an interesting dimension, as the track repeats the previous themes leading to another guitar section. A pleasant enough entry into the album, but not one that made this listener too optimistic about what was to come, and my overall impression was that the opening track overstayed its welcome and detracted from the effect “Love Among The Ruins” had.

Track No 2, “King Of The Sunset” (6:37) features additional vocals by David Longdon (Big Big Train) and more superb guitar work from Dave Bainbridge. This track is a definite grower and initially boosted my interest after the opener. The sound drops away around two minutes from the end of the track to leave an instrumental fade out featuring mandolin and guitar which was a bit unexpected. The thought that floated across my mind was that the ending section was not necessary.

As you progress through the tracks, there are some excellent passages, melodies that penetrate deep into your mind and will not go away, stunning vocals and guitar playing, and as the long track (second last on the album) approached, I was beginning to look forward to what the band could do on a 10 minute plus excursion.

The long track, “Remembrance” (11:44) starts off with piano, some spoken word By Barney Ashton Bullock before the acoustic backing starts to build courtesy of the mandolin. Excellent lyrics carry the track along and the listener eases into the journey that is unfolding. The narrative short interludes work very well but there seemed to be a fair repetition of some lyrics which, to my mind interrupted the journey. By the halfway point, the track was beginning to pull the listener back but the disappointment was that the track then seemed to retread the music that had already gone and appeared to lose its way. I think that this was another example of a track running out of ideas.

Halcyon Hymns has its moments, but the band seem unable to maintain those high points or to use them as jumping-off points. While I was not blown away by Halcyon Hymns, that is my personal opinion, and I would suggest, as always, that you should give this album a listen and see what you think. I will go check out the earlier albums and perhaps find the spark I seemed to miss from album No 4.