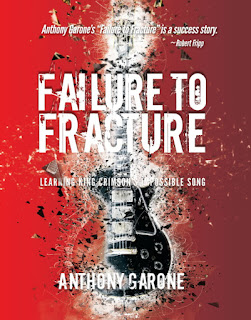 In a stunning, full-color book, author Anthony Garone details a 22-year journey of transformation in mastering the intricate complexity of “Fracture” - described by composer Robert Fripp as “impossible to play.”

Musician Anthony Garone was challenged by his father to learn “Fracture” in 1998. As a 16-year-old who practiced guitar six or more hours every day, he could not understand why he could play other technical pieces of music, but not “Fracture.” Over the years, he published blog posts and videos about his efforts. Garone kept working in isolated frustration until he enrolled in a week-long guitar instruction course led by Fripp in rural Mexico in 2015. That week was transformative.

It was in Mexico that Garone learned the mechanics of Fripp’s very unique right-hand technique. To properly play “Fracture,” Garone had to re-learn how to play guitar, sit, stand, and breathe. It would also require meditation and a new way of using his body.

Following many months of back-to-the-basics guitar practice, Garone re-trained himself to play guitar, playing a single open string for two hours a day across several weeks. In 2016, he was finally able to play small pieces of “Fracture” without any pain or frustration. He documented his progress on his Make Weird Music YouTube channel in a series called “Failure to Fracture.” The videos garnered hundreds of thousands of views and praise from Fripp himself, who wrote “Fracture is impossible to play, cf. Anthony Garone.”

“Failure to Fracture” captures Garone’s transformative 22-year journey. The story begins with his time as a teenager developing a friendship with guitar hero Steve Vai in 1996. It ends with video performances of both “Fracture” and the even more difficult “sequel” composition, “FraKctured,” written and performed in Fripp’s own New Standard Tuning. It is a book about achieving the impossible, overcoming one’s limitations, and retraining the mind and body.

In March 2021, Fripp stated on YouTube: “Anthony Garone is a man who has just written a book about to be published on ‘Failure to Fracture.’ Anthony has spent 22 years failing to play ‘Fracture.’ Actually, he’s done a pretty good job. Anthony’s failure is so well-achieved in my book, it’s a success.”

“The best story of the long path of craftsmanship I have come across.” - Trey Gunn, former member of King Crimson

“This book is a game changer. It delivers a detailed insight into a ‘secret’ world that is hardly ever being discussed in popular culture.” - Markus Reuter

“The insight in this book goes beyond simply learning to play an impossible song... it provides a roadmap for how to live your best life.” - Gabriel Riccio

Guitarist, author and composer Anthony Garone pens a compelling story of transformational failure after failure followed by a final victory: the ultimate performance of one of progressive rock’s most challenging and complex songs.