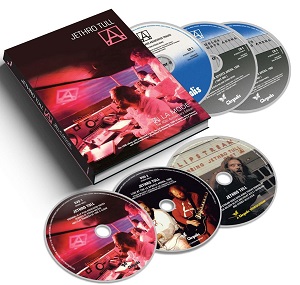 As Steven Wilson makes his way through the bountiful Jethro Tull catalog, fans get an opportunity to relive all of that great music. There are reissues and anniversary releases of many recordings available but there is a difference with these fine book editions that Jethro Tull has provided over the years. I have been the fortunate recipient of many.

A is not one of my favorite albums although I now have an entirely different view of the recording thanks to this A-La Mode 40th Anniversary Set 3 CD-3 DVD-Book Set. What was meant to be an Ian Anderson solo album turned into a full-blown JT album and an on-stage production and video of “Slipstream.” Also included is live concert footage in between the storyline with Ian trying to escape large pink balloons and posing as a vampire in the “Sweet Dream” video and thereby chasing himself posing as that despicable Aqualung.

Wilson is a true wizard when he works with the remastering of the catalog of JT. This is, as all the others are, all-inclusive and in-depth exploring the music at different angles, and the end products all differ. Each production offers a look into aspects of the music you have never heard before. That is the entire idea with these sets and hopefully giving the long-time faithful more appreciation for the music now. In the case of A, which was underrated at the time, it most certainly accomplishes that in more ways than one would expect. Interestingly enough, the band considers the album in their top third of releases. Perhaps now so will some fans. I still a have list of my top picks and this one still is not at the top of my list even after rediscovering it with different ears. Although I did appreciate the experience and reading the entire book, which was extremely informative, and hearing the music live and remastered was refreshing.

If you are a Jethro Tull fan, there is a lot to take in with this set and it will take some time. It is time well spent I believe. If you are an average fan, you would not consider releases such as this anyway. If you love your progressive rock and are interested in hearing one of the true innovators of the genre, then, of course, any of these massive reissues is a must. That is how I perceive it, but then again, I have been loving JT since the first time I heard Aqualung and I nearly wore out War Child as a teenager in discovery mode.

The treat here is after all these years, regardless of how long you have been following the band, there is always something new to discover. It’s like a basket of Easter eggs long before the day arrives, you cannot resist looking to see what is inside. And that is what makes it worth every penny and all of the time spent soaking it all up.

DVD One: Original Album and Associated Tracks
(Audio Only)
Contains Steven Wilson’s 2020 remix of the album and 5 associated tracks in DTS and Dolby AC 3, 5.1 surround, and stereo 96/24 LPCM. Flat transfers of the original LP master in 96/24 LPCM