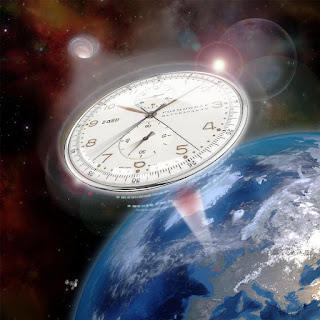 Cosmograf is the creative vehicle of Robin Armstrong, a multi-instrumentalist (guitar, keyboards, bass, drums and vocals), who also records and produces his music in his home studio. Robin has released 8 albums, from the debut, End Of Ecclesia in 2009, to the album under review, Rattrapante, released earlier this year.

To quote Robin, "Rattrapante is a French word which has its root in rattraper, meaning to catch up or recapture. A Rattrapante chronograph watch can simultaneously time two events, such as a lap split time and a final race time. As such it was the perfect metaphor for our interaction with time.

Cosmograf albums tend to be either concept albums, or at least, themed in some way. The sound of Cosmograf is rooted in 70's classic rock with a progressive twist, and although I have used the term neo-prog (from Progarchives) to indicate the musical style, there are straight metal passages as well as classical styled themes.

The guest musicians involved with Robin, who plays guitar, keyboards, bass and provides vocals, are Kyle Fenton (drums and backing vocals), Chrissy Mostyn (vocals on track 3) and Tommy McNally (spoken words on track 5). NASA is also credited for the use of some sound clips on the album.

The opening track from Rattrapante, "In 1985" (12:43), starts with a very distinctive nod to Pink Floyd’s David Gilmour, with some superbly atmospheric guitar over a gently building background before Robin’s shout of “Are you ready?” sets us off on an autobiographical journey which manages to veer from the poignant to the angry. There is an insistent driving beat and a Middle Eastern influence before the guitar wielded by Robin soars above all. With references to Concorde, Spectrum, and Amstrad computers, the Back To The Future film, Live Aid, Queen, Bowie, Life On Mars and the Heysel Disaster, this opener certainly catches the listeners interest and draws them into the nostalgia, before bringing things up to date as the track progresses. The sound of crowds cheering through the music adds to the atmosphere of this being a "live" track. A different middle section leads back into the driving style on show at the start, and thus, ends a very stunning opening track to commence a superb album.

The closing track of the album, “Time Will Flow” (12:42) is a different style to the opening track, especially the moodiness of the music. There is a relatively long scene-setting start, in some ways similar to the opening of track 1. As the moody aural landscape builds, there is a voice that appears, but not that of Robin, but Tommy McNally, narrating the fact that time is a very precious commodity that should be used, but carefully. Lines such as "Time shapes. Time Destroys. Time brings an end to all your joys." And "We measure time, but waste it more, equally bound, the rich and poor. Use it well for it can’t be made. Do it now, don’t be afraid,” include atmospheric music behind the narration which builds continuously until around the halfway point in the track, when after another excellent guitar section, vocals appear, courtesy of Robin. There are superb lyrics and masterful music in this stunning track and towards the end, a question is asked. "Look back upon what is done. A life well-lived. But did you think, what did you give?" As the track closes out, Robin's voice can be heard in the distance drifting away.

Rattrapante is a stunning album that settles into your grey matter within a couple of plays. Cosmograf has a superbly high standard of music across all previous 7 studio albums and Rattrapante is no exception. My advice is to grab a listen to this album and then clear a space on your CD shelf to slot it into.

(If you have not heard much of Cosmograf, check out one of my radio show podcasts ("Podcast: The Ancient One - Edition 161 - Progzilla Radio ) which is “A Brief History of Cosmograf” and takes a couple of tracks from each of the 8  studio albums.)